It’s never easy to say good-bye to a friend especially one so loyal, loving and goofy as our Hailee dog.  She became a part of our family 10 years ago as “damaged goods.”  I know that sounds odd to say such a thing but when Gold Bond Rescue presented Hailee as an option, they were up front about her health sharing her life expectancy might only be around 5 years.  Her previous owners were elderly and unable to provide proper care of a puppy.  She was often left at long periods of time inside her crate with little room to move.  Consequently, she developed deformed hips, shoulders and elbows.  When she was rescued by GBR, the veterinarian recommended to put her down but instead they proceeded with surgery on the upper part of her body.  We “fostered” Hailee for 10 years due to her health.

Hailee never had a “normal” dog’s life—playing with other dogs at the dog park or running after frisbees or tennis balls.  Instead, we did other things including walking miles and miles up and down the West Salem hills to keep her, and us, in shape.  She never gave up no matter how sore her hips might become.  There was a sweet nature about her yet she was soooo stubborn at times.  She was known by several names but probably the stupidest one was Dogwood.  One day the autocorrect feature decided to change the words Woofy Dawg to Dogwood.  Sooo…she answered to Dogwood

She had two dog friends—Honda and Pete.  They both seemed to understand Hailee’s condition.  Every once in a while, they’d sneak in a good game of chase or a hearty game of tug-a-war.  Hailee loved cats.  She made it her responsibility to take care of our own and got to know those in the neighborhood.  We lucked out recently when we adopted Butler and Lyra as they were such willing partners.  Butler is especially fond of dogs and loved to bathe Hailee’s face, ears and feet.  He sensed when she was having a bad day.  Both cats liked to curl up with her on the “pet” bed for a snooze.  Sometimes Hailee looked up at us rather woefully as if to say “Do I really have to do this?” yet she never moved away.

Hailee was very social which was often quite challenging on our walks.   She insisted on greeting everybody, and I mean everyone, as we went along. Sometimes she refused to budge until she got to properly say “hello” to her buddies.  She “crab walked” when we didn’t slow down for her to get a good look at something.  She was also very intuitive when it came to one of us being gone.  For a while Larry went to Albany quite a bit helping his elderly folks.  Hailee would plant herself at the back door waiting for Larry’s return about the same time he left Albany.  She was ready to greet him at the door no matter how long it took.

Hailee was known as the “Shop Vac” when it came to eating.  Nothing stayed in her bowl longer than a few seconds and she was always looking for more.  We couldn’t leave her unsupervised during garden season as she sampled the veggies and especially targeted the strawberries and blueberries.  We tried fencing the area with little success as she’d jump over it and then couldn’t get out.

Each year at this time I give my spiel about how Hailee the Wonder Dog survived another year of life.  This past Wednesday was her day to celebrate.  Instead, we rushed Hailee to Dr. Swart’s office as she wasn’t feeling well.  She passed away the next morning from liver failure.  Cause unknown at this point.  Hailee almost made it to her 12th birthday only shy of a couple of months.

We had quite the ride with our Wonder Dog.  Never thought she would be with us for so many years.  Will miss her terribly…Already do.

Run Hailee the Wonder Dog.  Run to your heart’s content. Love you Dogwood!!! Halo (#2074) aka Hailee-O came into Golden Bond at the end of September 2010. For an 11 month old she was in pretty bad shape, which was clearly the result of bad breeding, accentuated by bad nutrition. Halo had never seen a vet; her skin was in terrible shape and she had no muscle tone in her rear legs.

Golden Bond took her to a vet where it was discovered that she had one bad hock, bad hips, knees, and shoulders.

From Halo’s foster family:
Halo arrived at our house the middle of July ‘11 as a happy, well-behaved 1-1/2 year old thanks to Golden Bond Rescue and her first foster family. I understand she had quite a rocky start in life undergoing several surgeries before becoming a permanent foster dog and moving to our house.

We have to admit there was some apprehension about Halo’s “fragile” condition and how much she could do but Halo proved us wrong. She is a very quirky and loving dog—so typical of Goldens. However, unlike most Goldens, she does not walk around with a couple of tennis balls in her mouth trying for more or carry a Frisbee ready to play. She does, however, require your full attention and body contact at all times. She is definitely the neediest Golden we’ve ever had.

She is excellent with other dogs and cats, which was of high importance as she had to be able to live with two indoor cats and get along with our friends dogs. Actually it was quite comical watching her meet our two cats; Valentine (12 years old) and Fiki (7 years old). At the first meeting, Valentine had taken up his command post in the rocking chair. Halo stuck her nose in his face and pulled back a bit not knowing what to expect. Valentine leaned forward and touched his nose to hers. This really surprised Halo as they had never met. Now they share the dog bed with Valentine often getting more time than Halo. Fiki was another story—she tolerates other critters but even Halo has won her over—most of the time. Halo has a tendency to herd Fiki along which makes Fiki squeal like a little pig. 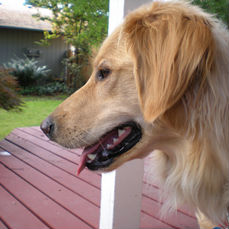 Halo is the master at getting your attention often pulling all her toys out of the basket, shaking the stuffed toys and bouncing her Kong around the cat that’s trying to sleep on her pillow. She also has her sweet moments when she rests her head on your lap looking up at you with her beautiful brown eyes.

Halo is doing very well health-wise. Our goal is to keep her that way so she can have a very long life! When she went for her 2 year old check-up in October she weighed 57 pounds and the vet was totally amazed and impressed at how muscular she was and how strong her heart was. I’m sure that relates to the excellent care she received while with her first family which included swim therapy that helped her heal from the various surgeries. If she didn’t have to be careful about her hips she could have been an “Olympic” Dock Diver!!! We try to be very mindful of her joints and at this point she hasn’t demonstrated anything to show us that she is in pain.

During the summer time she spent more time in the back yard eating tomatoes, blueberries and strawberries, but doesn’t like zucchini though. She shares an apple a day (without the seeds) and eats dried cranberries. I’m sure this attributed to her being the healthiest dog ever.

Exercise is a big deal for Halo even though she is not able to run marathons or race alongside a bicycle. Besides getting out for weekend adventures to the beach and to local parks she has a daily walking routine—most often through our neighborhood which can be from 2-4 hilly miles depending on the rain. She is the most determined dog for routine and knows the routes by heart. There are only certain places you stop for treats and you must walk on the sidewalk whenever possible and of course you can only cross the street at approved locations. (She lets me know when I take her for a short walk that it is so against what Larry does every day.)

She’s developed quite a few new friends–human and critter-wise. She starts doing her crab-walk when she gets close to where the cats like to snooze on top of the cars and she knows exactly where all the birds hang out at the largest neighborhood “smorgasbord” birdfeeder. Squirrels are a bit of a challenge!

When she gets excited she prances. I had to chuckle one day when we were passing a couple that asked if she was a show dog because she was trotting along so elegantly.

It’s hard to believe that Halo has been with us 6 months. She continues to bring us much laughter and joy. Her spirit bubbles over with mischief! But what do you expect from a two year old???