When I applied for another Golden Bond dog 8.5 yrs ago, my needs were simple- I said I only wanted a goofball.  Enter Murphy. He was turned into a shelter in Oregon that contacted Golden Bond to take him because they misinterpreted his “snarly face” as a potential biter! They said he needed a firm hand to teach him “how to be a happy Golden Retriever”. What a laugh!

I was told he was 6-8 yrs old then so he was an old boy indeed when he recently crossed the Rainbow Bridge. Although his hips weren’t in the best of shape, the dear boy just finally got tired and when he started acting like he really wasn’t sure where he was, didn’t want to go for rides, refused fresh donkey poop and slept over 12 straight hours one night (and not by me), I knew it was time. Murphy was devoted to me from the moment he jumped into the back of my car when his foster brought him to me. He was MurphyByMySide for all those years- if I left one room to go to another, he went too. He loved to ride in the front seat of the car and  hold paws, and he slept by my side of the bed every night until his last. He cheered me up every day, and was my very best friend and confidante. He guarded secrets well. I told him if I had him when I was a teenager I might have turned out the way my mother wanted.  I referred to him as my Sentinel (“a soldier stationed as a guard to challenge all comers and prevent a surprise attack“)- well maybe not all of that. He might not have withstood an attack but he would have climbed Mt Everest if I had asked him to go with me. adored by our little cat, Yogi Bear Paws, who would curl up and sleep with him after cleaning his face and ears. She will miss him as will his little buddy, the MagPie. There will never be another dog even remotely like him. This boy took the key to my heart with him. You are safe in my heart, old friend. Sleep well. 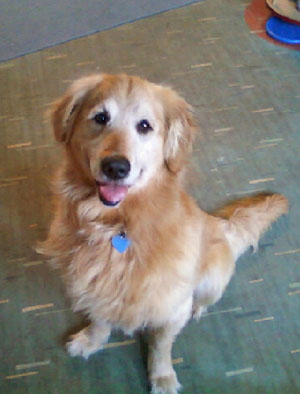 Hi, I’m The Murph (Murphy #2026)!! My new mom took one look at this photo of me in my friend Norman’s Facebook album and said something to my new dad about “being in trouble now” and was in Portland looking for me within a couple of days! She said I was just what she needed to fill the hole in her heart left by her True Blue Golden buddy, Hunter. She told me I don’t have big Hunter paws to fill because I am a Murph and one of a kind!!

After having me a few days and leaving me in the house while she went to work, she came home and told me a story about some “Three Bears”. She told me about “someone’s been sitting in my chair”, and “someone’s been sleeping in my bed” as if this was supposed to mean something to me. She then said something else about porridge, but I don’t know what that stuff even is.

A few days after I got here, we went on an exciting walk down through our pasture to my own personal river, the Little Deschutes! I jumped in that water, and then jumped out and zoomed all up and down the riverbank barking because I was just so excited. I don’t how to do this swimming thing yet, but my mom says I’m really good at splashing. My mom says she loves me so much because I can make her laugh all the time, all the time. Thanks to my good friend, Norman, for rescuing me and my foster mom, Shari, for taking good care of me and helping me to learn to be the bestest dog for my new family!